This year, Kyrene School District was fortunate to bring Collin Kartchner back to speak to middle school students and the community. Kartchner has travelled the country with his Save the Kids movement, educating audiences on the negative implications screen time and social media has on today’s youth. Over the course of two days, he presented to all Kyrene middle schools, and ended his visit with an event for parents and guardians.

Teens resonate with Kartchner’s message in part due to his delivery. Humorous, kind, and the father of a 13 year old daughter, he understands the difficulties that come with growing up in a technologically-driven world. Obstacles that children face today are often exacerbated by social media – through cyberbullying, increased social anxiety and insecurity. “I get so many messages from students across the country who say, “Why am I like this?” But I’m here to tell you it’s not just you.” Kartchner assured the students. “These platforms are designed to be addictive, and they only showcase snippets. You can’t compare your life to someone else’s highlight reel.”

To drive his point home, Kartchner tallied up the time just two hours of screen time every day amounts to in a year. “If you had one and a half months of waking time, what would you do with it? What would you accomplish?” As an example, Kartchner shared the story of the Ice Bucket Challenge. Students were shocked to learn that the viral challenge responsible for raising $115 million dollars for ALS was started by a 12 year old boy on Facebook simply looking for a way to help his mom. 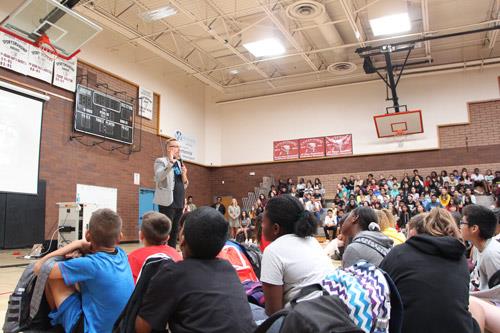 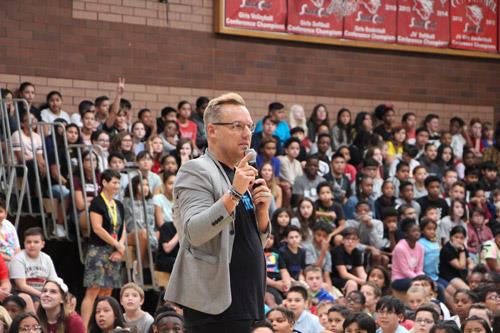 While Kartchner candidly shared the pitfalls of screen time, the conversation didn’t end with him asking students to uninstall every popular app on their phone. Instead, he urged them to look inward and determine where their happiness stemmed from. Was it the hours spent on their gaming consoles, or mindlessly scrolling through Instagram? Judging by the students’ cheers that he received when he suggested Nike change their slogan to “Just Delete Fortnite,” it was clear they were ready to make a change.

On Wednesday night, Kartchner took the stage at Corona del Sol High School to share a similar message with parents and guardians. Students who attended with their families were excited for the opportunity to hear him speak for the second time that week.

“Does anyone here remember when they were 13? Does anyone want to remember when they were 13?” Kartchner asked the audience. “With a social, emotional and psychological state more fragile than it’s ever been in your entire life, I want you to imagine your mom handing you a smartphone with untethered access to social media.” He equated giving their child a phone to handing them the keys to a motorcycle with zero training.

Kartchner also emphasized the importance of not just limiting screen time for their teens, but also for themselves.

After sharing the statistics on teen anxiety, depression, and suicide, Kartchner asked the burning question, “So what is the answer? How do we save the kids?” 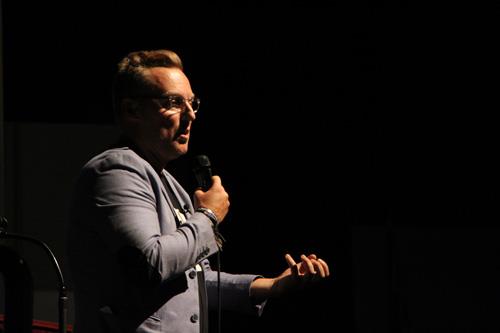 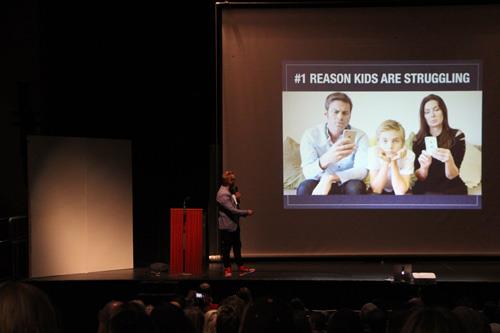 “The answer to how we save the kids is that we can’t. Not until we first save ourselves. As adults and parents, we must break free of our screen dependency and our social media addiction, and start modeling healthy digital behavior for our kids.” Kartchner explained.

Most of all, Kartchner highlighted the importance of the connection between parents and their children. While he shared resources and books to help understand what it’s like to grow up in their child’s world – he also encouraged them to simply ask. Teens often fall victim to something he refers to as phone-snubbing, or “phubbing” for short. “Engage with your children when they come home from school. Put your phone down when you ask them about their day, or when they want to share what’s troubling them. Candy can be crushed whenever, but your children are only young once. Be present.”

In addition to a technology contract, a central charging stations for families, books, and open dialogue, he suggested a few monitoring apps to help parents keep tabs on their child’s online behavior. Kartchner gave high praise to one tool in particular, and the audience raised their phones to take a photo of the slide. A moment later, in bold letters, the word “you” appeared on the screen.

“You are the best monitoring device on the market. Nothing will ever replace that.”

“How to Raise an Adult: Break Free of the Overparenting Trap and Prepare Your Kid for Success” by Julie Lythcott-Haims, Dean of Stanford Admissions